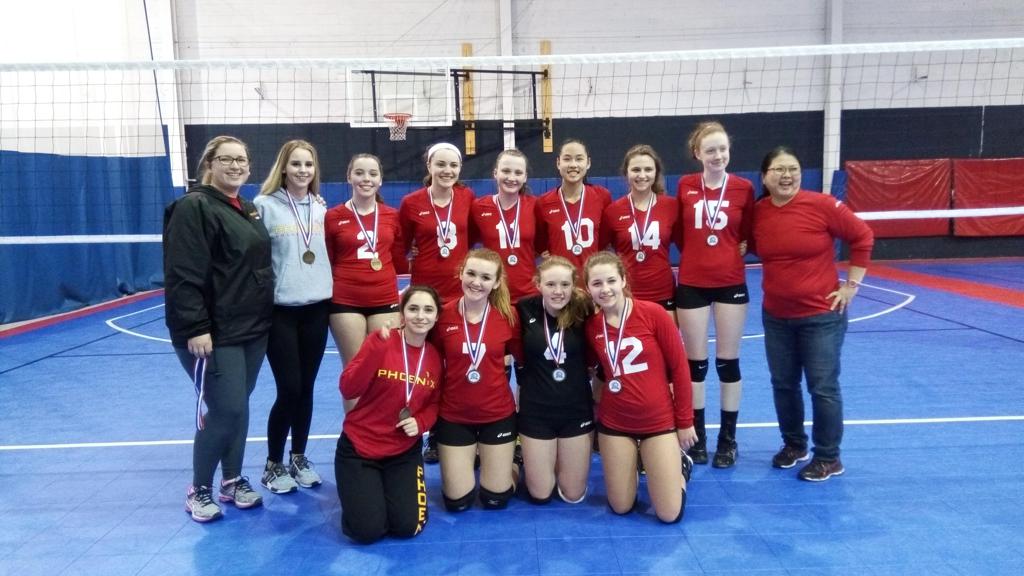 The Weekend that was Vol IX

Last weekend was the final time that the 15s will take the court this club season. 15 Black was in Flight 6 at PowerZone with 15 Red in Flight 3 at home base at the NJ Sports House.

15 Black was in a dogfight all day. The ladies took on NJVBC15 and lost the first set 25 - 23. This team has fought all season and drew back to level by winning the 2nd set 25 - 17. Unfortunately 15 Black could not come all the way back and lost the 3rd set by 2 17 -15.  The next match went to 3 sets as well. The opponent was Essex 15 White and again the 3rd set was decided by 2 points. Essex 15 White won the match 16 - 14 and 15 Black just had one more set for their season. 15 Black played the 1 seed in the pool Performance 15 Navy and won in 2 sets with their best effort of the day. 15 Black, with all the changes this season, ended their season with a victory.

15 Red has been very successful with many tournaments ended in the Winner's Bracket and this one was no different. 15 Red coasted through the 1st 2 matches winning both comfortably (each set score was +8 or more for the squad). Pool B was already clinched for 15 Red before the team took the floor in the last Pool Play match vs ECC 15 North Black. ECC 15 North Black played very well all day and finally broke through and won the match. 15 Red secured 1st place by virtue of defeating the 2nd place team NY Blast earlier in the day.

15 Red advanced to Pool A 2nd place Dragon Warriors 15. Dragon Warriors had the same exact road as 15 Red as they won their 1st 2 matches and then lost their finale. Both teams looked to move forward toward a tournament win. 15 Red lost the first set 25 - 19 but quickly rebounded and won the 2nd set 25 -17. In their 1st 3rd set of the day, 15 Red made it look easy winning 15 - 8 to advance to yet another final.  The ladies had a tall order as the opponent was undefeated. CJVA 15 White maintained their undefeated record on the day and won the final in straight sets. The day and season was over 15 Red and the squad should be very proud of themselves as they were one of PVNJ most successful teams this season. According to GEVA rankings, 15 Red finished 18 of 103 15 Club teams which is remarkable. The future is bright for Phoenix Volleyball NJ.

The Weekend that was Vol VI

All the teams in action had the luxury of playing in the facility where they practice at the NJ Sports House. Every team made the playoffs so a good weekend for all. Let's recap.

14 Black who has been improving each and every week drew a tough pool with Performance 14 Navy & LHVA 14 Purple. Both of those squads made it to the Semifinals and our ladies were 3rd in Pool B. Due to the pool play games record of 4-4, 14 Black still had a shot at winning the tournament. But the day was ended for them by the eventual tournament winner Digs 14 White who won Pool A.

14 Red were in Pool C and drew Aspire 14 Blue & Cut Shot 14 Elite and finished 3rd. And just like their Phoenix sisters finished well enough to advance to the playoffs. The ladies ran into the same Performance 14 Navy squad and lost in a hard fought 2 sets 25-16 & 25- 21. A good day for 14 Red and according to Coach Karen "played some really great volleyball and they continue to improve and raise their level of play with each tournament".

15 Black had a similar day to their younger Phoenix sisters as they ran into 2 teams that were in the semifinals Essex 15 Black & Golden Dragons 15s. 3rd place was good enough to advance to the playoffs and ran into Pool A winner LBVC 15 -1. Another good outing for the squad as the season has stabilized.

15 Red has been riding high and this team swept through Pool C and won every match in straight sets and had the highest point percentage. The ladies drew 2nd from Pool B Arsenal Elite 15 U and won again in straight sets. Then Essex 15 Black was waiting to complete a Phoenix sweep in the semifinals. This match was back and forth as every set went to extra points. In a nail biter Essex won the match 25-27, 28-26, 19-17. 15 Red lost once all day and in the most exciting match of the day.

All teams will be back the weekend of April 8 & 9.