At the beginning of every season the goal of Phoenix Volleyball NJ teams is to make sure that every player is better than when they arrive. But when a team wins a tournament that makes the season that much sweeter. April 9 was the date where 14 Red made their season sweeter.

This team is a team where some are new to club volleyball and some are products of Phoenix Volleyball NJ's VolleyKids system. When speaking of the returning athletes who played for 14 Red last season Coach Klingner remarked  "The returning players have been great in helping the newcomers feel welcomed on the team." She continued  "During the first few practices the returning players would stay together during warm ups, but as the weeks went on and they all began to get to know each other better, the dividing line disappeared."

The team had a very good season to this point as 14 Red has advanced to playoffs four times of five tournaments in GEVA play. These girls were ready for a breakthrough at the CJ Heat 14 Club tournament at Powerzone.

The ladies opened against Creole 14 and won handily 25-13 and 25-18 which would lead to their next pool play match vs. Cut Shot 14 Elite. "In our second match against Cut Shot, a team we had split with in pool play on on those two previous occasions, I knew that if we could win both sets against them that we had a good chance of running our pool." Klingner remarked. This time, 14 Red rose to the occasion and defeated their opponents 25-23 & 25-21 moving to 4-0 on the day.

The squad had one more tight set during pool play vs. AVVC 14 White but vanquished that team along with ECC 14 North Black to claim 1st place in Pool A and advance to their 3rd Playoff pool for 2016.

As the playoffs approached the ladies were ready due to Klingner's direction during the day. Klingner says "My girls were able to watch both of those teams beforehand, and during the finals and that also helped us.  I always try to get them to be students of the game and encourage them to pick up serving and hitting tendencies of the other teams and how they react to poor passes, especially the setter."  The ladies were ready to show what they learned.

In the semifinal round they faced off against Performance 14 Navy 2nd place from Pool B and the ladies won 25-20 & 25-21 to advance to their 1st final of the season. Up next Digs 14 White Pool B 1st place finishers.

The lessons that were learned in practice sessions were shown in the final especially as the team fought back after being down early on in the sets to defeat Digs 14 Blue and win the Final 26-24 & 25-21 and the CJ Heat 14 Club tournament.

14 Red on the day did not drop a set and won by the required 2 points three times . A very dominant performance by 14 Red. After the victory Coach Klingner had these thoughts, " Winning the semis and the finals in straight sets, with come from behind wins in those sets, just shows how much these girls have learned and how much they trust and respect one another on the court."

14 Red will next see the court for GEVA Regionals as they look to conclude their GEVA season on a high note.

Sisterhood through the game of Volleyball

This came to my attention from Phoenix Volleyball NJ Owner/Director Annie Hung. 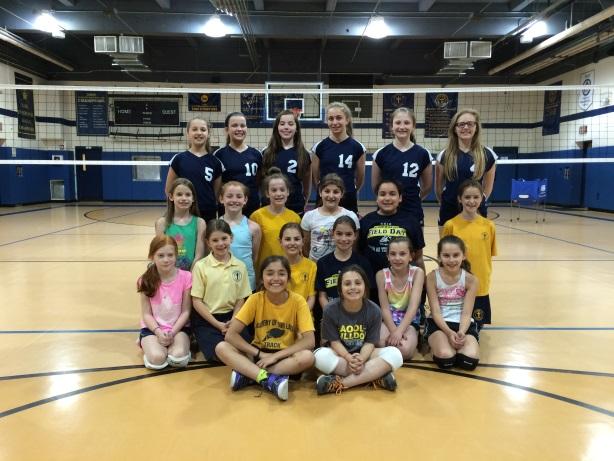 This past spring several girls from 14 Red, held a volleyball clinic for girls at their school as a service project to earn their Girl Scout Silver Award and Community Service Bar.  Led by the program director & project advisor Mrs. Sara Duffin, Academy of Our Lady School has a strong volleyball program for grades 5-8 and these girls wanted to keep that tradition alive by bringing their passion for the game to upcoming players.

Kate, Baylee-Rose, & Julia along with classmates Jillian, Olivia & Emma held a 6 day clinic for 4th & 5th graders to learn the basics of the game.  The clinic had 15 participants that learned volleyball terminology and skills.  They also held a 2 day clinic for existing players in the 6th grade to work on and improve their skills.

Each day the girls would lead participants in warm-ups and then begin with drills they learned from their years at Academy and on club teams.  Not only did they work on teaching how to serve, pass, set, and hit, they worked on conditioning drills to improve the skills they just learned.   Each girl worked her strength to show how to play; Kate would work with the girls showing them how to set the ball and drills to practice at home, Julia worked with girls on the importance of passing the ball to the setter, Baylee-Rose taught the girls how to hit the ball on the third possession to get it over the net.  Each girl would also work with everyone on serving techniques.  A key element that they emphasized was to always have fun and to always give your all on the court.

This fall all participants of their clinic signed up to play on the junior varsity teams at Academy of Our Lady.  The girls continued their mentoring by assisting the coaches at all practices and have supported the teams at games and assisted with team warmups.  The junior varsity coaches have all said how they credit their team’s success to the clinic and mentoring each of these fine young ladies have brought to their girls.  They are true role models for the younger players to look up to.

Kate, Baylee-Rose and Julia all hope to continue to play volleyball for Phoenix this year and plan to play in high school next year.  Their love and passion for volleyball is evident by their dedication to the game.